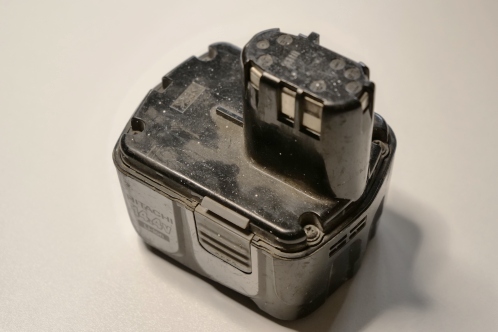 In 2018, at my than current job, this tool-battery went defective. The cordless drills that had these batteries supplied weren't old at that time, so I found them being defect a little strange.

When measuring the voltage I got a nice 16 Volt on the main terminals (4 lithium cells in serie at 4,2 Volt per cell = 16.8 Volt maximum) and also when measuring the cell-junction voltages, brought to the outside world via terminals, everything proved to be well balanced.

16 Volts is a very healthy voltage, although it doesn't say anything about internal resistance. When drawing a considerable current, things can be totally different. At the electronics-department I found a nice high-load resistor, but when drawing 5 Amps, the main voltage stayed well within range and hardly dropped at all.

Strange! With a defective battery I at least expected a voltage below 12 Volts or a significant drop in voltage when loading the battery. That the cells all had matching voltages made this even more mysterious.

I withdrew the battery from the pool to look at it at home. I forgot to take it home with for a loong time, but that in itself got some insight on how goo the cells were, because even after being without charge for so long, the cells were still in excellent condition. 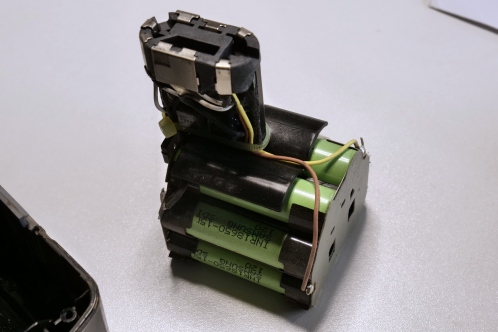 Completely to my surprise these batteries can be opened by just removing four screws. Once opened, these batteries prove to be well made. Of course, they have to when they will face a rough life in the professional tool industry.

It's a 4S2P battery, (4 cells in serie with every cell-group consisting of 2 paired cells).

The cells are Samsung INR18650-15L, able to deliver 18 times their nominal current.

Safety measures inside the pack 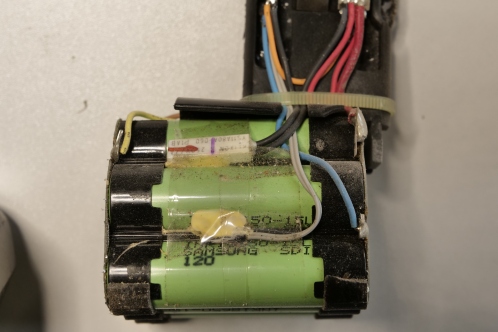 Multiple components for safety are visible. A thermistor and a klixon, I expect the klixon to be used when the pack is inserted in the tool and break the current should the battery heat up too much, where the charger relies on the thermistor to depend it's decisions on.

Other security components and the FETs are located in the protruding part of the battery and potted.

Cause: most likely bad spotwelds 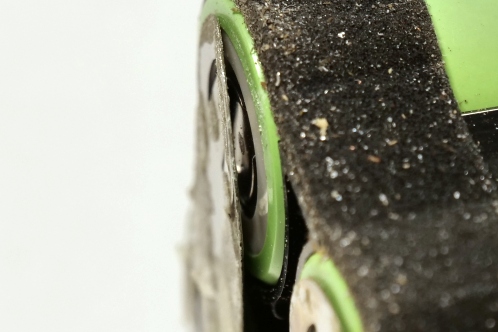 Upon further inspection of the pack, which required pulling the insulating paper (with adhesive layer) revealed the first possible cause.

At a few cells I not only removed the paper, but also pulled the cells interconnecting strips right from the cells' terminals on one side.

The cells' terminal surface obviously showed that the spotwelds had not succeeded. Upon pulling the connections, metal from those connections usually stays behind and removal usually takes a lot of effort.

In this condition, the spotwelds are likely to fail when the battery or tool sustains mechanical impact due to a fall.

Also on the other side the connecting strips disconnected to easily. I expect this to be the cause of the charger labeling the battery as defective. The cells are allowed to be quickcharger with a 4 Amp charge, which will fully charge them in 40 minutes.

Because I know that the charger has active cooling done on the pack and can top the pack up within an hour, I expect the quickcharge-limit to be reached. At 8 Amps (because of 2 cells in parallel) a contact-resistance due to bad spotwelds will start to play a keyrole and cause a rise in voltage. This will in turn trigger the Battery Management System that will turn off the FETs and will make the charger show a malfunction accordingly.

The cells itself clearly were NOT the problem. When tested in the Opus BC-T3100 charger, not only all cells were charged with just a 2 minute difference in total charge time, also the capacity-match was off by just 20 mAh. The internal resistance of all cells was equal as well. This strengthens my belief that the failed spotwelds are to blame.

Something happened I was afraid of since the beginning of working with lithium-cells. Upon removal of the spotwelds on the positive terminal of the very last cell, which did have good spotwelds a sharp piece of this connection pierced through the insulation and made contact with the negative terminal. 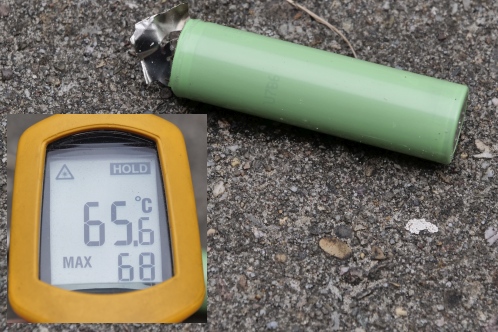 An attempt to break the short that had occured failed: it had weld itself stuck and started to glow already.
The cell clearly started to warm up.

I didn't doubt and ran downstairs and put the cell outside on the tiles, to only run back up and get my temperature-gun (because I obviously wanted to know how bad this was going to get, as you understand).

The cell's temperature did not exceed 70 degree Celsius. Also no flames or other spectacular happening. There only was some smoke, I expect it to have been electrolyte. The cell did start to leak, but after 10 minutes the worst was over and I expect the pressure relief valve to have acted and prevent an even worse outcome.

This is all according to datasheet, but even so I keep wondering what would have happened if this cell would have been closely packed away with 7 others in a rather badly ventilated pack-casing.

Out of precaution I left the cell out in the open air for a day, but didn't record any strange effects anymore.

And the cells, what happened to them?

Just like any other batterypack I opened, I also was 'left' with the bare cells with this one. Because these cells are well able to be discharged at very high currents ánd I was in need of a new torch, these cells now live on in my Acebeam L17.