If you came here to find out what probably isn't the best shop to buy a Firewire-cable, I have to disappoint you. I won't mention the name of the company because everything (eventually) was taken care of like it should after sending a request to get my money-back.
Unfortunately, there is consequential damage, but the camera that got damaged is written out so that just is some bad luck.

I bought a Firewire add-on card for my PC, a Dell Optiplex 990 in Slim Form Factor. Though Firewire is a rather old standard, I really needed it if I wanted to connect my videocamera to my computer.
Besides the add-on card, I bought a cable at the same German company.

Everything was delivered within a week and I started to install everything in the small Dell machine, which was a real party. You don't need any tools at all to get going.

After mounting the card, I booted my machine. Windows found it without troubles and I connected the Firewire cable.
The battery of the camera was drained, so I connected that to the mains power supply. 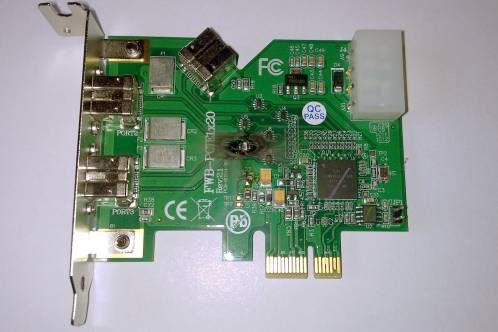 I turned the camera on and I connected the Firewire cable to the camera. Within a second, the typical smell of a semiconductor going up in smoke reached my nose.

I inhaled deeply above the camera, but I couldn't find a distinct smelly spot over there. When I got close to my PC, the smell became much stronger and by means of a great yank, I pulled the Firewire cable.

Without doubt I pulled the mains-plug from my PC in the same manner, as the smell was clearly originating from that place.

I removed the PC from it's support and removed the Firewire-card. I did not have to search for the problem for long... 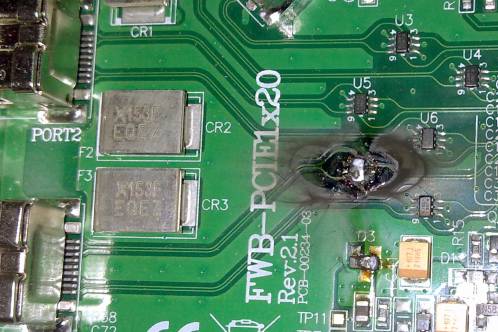 What grabbed my attention was this interesting spot of the burned component.
The two PCB-traces you see, is one of two pairs of data-lines available per 9-pins Firewire connector. The remaining pins of these connecters carry power for connected equipment.

The burned component is a termination-circuit that decouples the datalines. The fact that this component went up in flames, proved that there had been a massive current through this device, through the datalines.

The only thing I could think of was a faulty-wired cable, as the camera had always worked flawless connected to a different computer.

I hoped that the remaining connector was still working, but the massive short had also reached the power-supply of the card. Just placing the card in the computer got some components to heat up to about 70 degrees, so the card was destroyed.

Finding the cause: measuring the cable

With a big document concerning 'The Firewire standard' found on the internet at hand, I grabbed the 9-pin to 4-pin Firewire cable and a multimeter with 2 very fine testpins.
I noted down the connections I found by continuity-testing the whole cable and what I found made me very sad.

Two data-pins of the 4-pin plug had been connected to the power-supply pins of the 9-pin connector.

If I had bought this cable in China for a dollar or something, I could have blamed myself, but this cable was bought at a German electronics-distributor with a good reputation.

Although it was cheap with 3,50 Euro, I did not pick it on price alone. It was one of the few 9-to-4 pin cables I could find.

I contacted the seller after my findings. I also sent a copy of the image on the right. The card and the cable were sent back by request without any additional cost. It has taken 6 months and multiple emails to the company to really get my money back.

Damage beyond the card

Fortunately, my computer survived this adventure.
Unfortunately, the Firewire-interface in the videocamera didn't live to see another day. I can plug it in and wait all I want, but the computer just doesn't see the camera. If I plug my brothers' camera in, it works flawless.